Chart of Consciousness,
as mapped by Dr. David Hawkins – Knighted under the Danish Crown. Also known as Sir Doctor Doctor, writer of Power vs Force.

According to Dr. Hawkins, the mind is 99% silent. Only 1% is talking.
The only reason we can communicate is because of the commonality of consciousness. 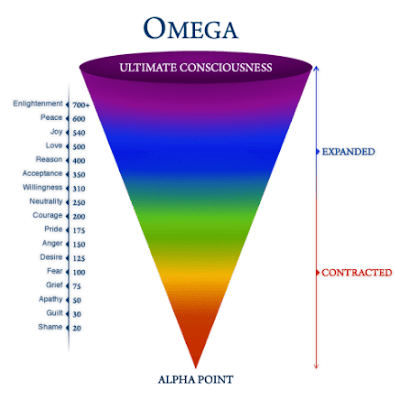 Dr. Hawkins put together a Chart of Consciousness that is very much like Royal Raymond Rife's understanding of electromagnetic frequency portrayed by our emotional states. Rife's frequencies pertaining to emotion ranged from the “elf's”, extreme low frequencies, to the upper expanded frequencies, all within or just outside the audible spectrum. From less than 20 hertz to over 20000.

Sound waves have shown to effect and align consciousness and emotion. Rife's work showed that extreme low frequencies effectively apply more influence upon the human body than the higher frequencies when applied to an individual, through direct conductive contact and through inaudible sound waves, due to the science of electromagnetic fields crossing and dividing into one another and changing the size and shape of DNA in the bloodstream to match that frequency and carry out duties associated with that size and shape, which is the ultimate cause of the detrimental symptoms of stress.

The chart Dr. Hawkins made, from the low calibration of Shame to the high calibration of Enlightenment, maps conscious energy on a graph from a fearful, suffering and contracted conscious state, all the way to the loving, expanded experience of ultimate consciousness.

In between these two polarized states of consciousness are the many experiences of conscious energy that we experience and that we also put out. These energies we subject ourselves to through others and our environment and can choose to harmonize with them. Also, we emit these energies from ourselves, through the aetheric and electromagnetic energy of our human aura; physically centered on the vibrations put out by the 7 layers of muscles around the heart that apply frequency to our DNA via this electromagnetic charge. Spiritually the center of this energy is our will, and the aura of the human being reflects this energy via the physical being in this manner; in terms of frequency and potential.

This understanding of consciousness goes beyond Freudian calibration, which caps its' understanding through psychological lens at 499. Freud's materialist logic denied him from tapping into the conscious field that connects all things. When that belief is denied to the individual psyche, then the world view becomes limited and higher experiences of the expanded consciousness are willfully denied.

Many have taken to using psychedelics to raise their calibration of consciousness. Physical substances have resonant frequencies, that when ingested, inhaled, or applied to the body in some way shape or form, apply their influence to alter the state of human consciousness. This is an external application our conscious experiences for only that brief period of time in which the physical substance lasts.
This is also how food works, and all experience of physical things. Frequency is applied to the physical body and the consciousness inside reacts with it. Whether or not it is harmonized with depends on the output of the will of the individual interacting with the input of physical experience. Perception of conscious experiences, and the experiences of our entire life as an individual, are always unique due to that interaction.
Through meditation alone one can willfully raise their calibration, or frequency of conscious energy. Such proofs of this are recognized in the ancient art of kundalini yoga, dao breathing exercises and endless mystic and religious arts that focus on consciousness being emitted from within. Through this truth, tradition and ritual has been created and followed in our religions and our cults to remember this ancient art. Through personification of powers and allegorical tales these truths have been maintained in all the languages of mankind. In all creation myths and all apocalyptic end world myths, the Alpha and Omega states of consciousness are portrayed and referenced to for our benefit. Understanding of these works are meant to be understood literally in this metaphysical sense.

This chart of consciousness, is nothing new. It's just a new age re-imagination and portrayal of the tree of life. It is the same thing as Jacob's latter. It is the tree of life and knowledge. Its' inner-workings have been epitomized in the mystic works of the many three pillar systems, such as the Chakras of the body or Sephiroths of the Kabbalah. It is reflected in the realms of Yggdrasil or the cities of heaven and hell. It is reflected in the physical earth and the physical heavens as much as it is referenced allegorically throughout the ages. Astrological mappings of consciousness in the Zodiac reflect a chronological application of physical frequencies of energies applied to the masses throughout time and space.

Through this new age understanding of old world teachings more people are brought to the light of truth.

at March 23, 2019
Email ThisBlogThis!Share to TwitterShare to FacebookShare to Pinterest
Labels: Physical and Spiritual Health, The Missing Link Between Spirit and Science

Chart of Consciousness, as mapped by Dr. David Hawkins – Knighted under the Danish Crown. Also known as Sir Doctor Doctor, writer of Po...

Listen to the Apple of Perception Podcast:

Listen to the Podcast:

" The greatest force in the human body is the natural drive of the body to heal itself - but that force is not independent of the belief system, which can translate expectations into physiological change. Nothing is more wondrous about the fifteen billion neurons in the human brain than their ability to convert thoughts, hopes, ideas, and attitudes into chemical substances. Everything begins, therefore, with belief. What we believe is the most powerful option of all."
Norman Cousins

Metaphysical research on the occult, ancient myth, alternative health, science and history; and all that influences the subjective point of view.